Brooklyn Nine Nine has so many hilarious guest stars and recurring character!

They improve an already perfect show, they disrupt the narrative and create more opportunities for the cast to show different traits and grow.

Given Andy Samberg’s background on SNL, a lot of them are from the show. But we can’t forget Micheal Schur’s previous shows like “Parks and Rec” and “The Office”.

SO MANY AMAZING PEOPLE!

He was Oscar the accountant on “The Office” and on B99 he played the doctor that has to tell Captain Holt and Jake that they have contracted the mumps.

Kate Flannery was also an important character on “The Office”. She was Meredith and here on Brooklyn she plays the head janitor who refuses to clean the precinct’s break room after Boyle blows up his pressure cooker.

I was so happy to see them again!

It’s so funny that his name sounds like “Low hank” because he was sad and low-energy.

You might recognise him from VEEP, where he plays Mike.

Yesterday I watched “Get Out” by Jordan Peele (Chelsea Peretti’s husband) and as soon as he came up on the screen I shouted: “It’s Captain Roger Peralta!!!” He plays Jake’s absent father and it’s hilarious. Every single episode he is in, it’s crazy. (Just look at the thanksgiving episode in season 5!)

Since we’re talking about dads, he plays a fire marshal who is competing with the NYPD and like Jake, he was abandoned by his father. This helps them form an alliance and it’s so funny.

If you’ve seen 30 Rock, you might remember him as the questionably competent doctor Spaceman. Here, he plays Sophia Perez’s (Eva Longoria) boss Geoffrey Hoytsman who Jake arrests for possession of drugs and then Hoytsman kidnaps him to get revenge. It’s so stupid and so great.

Eva Longoria is Jake’s ex-girlfriend, an attorney lawyer. Since cops and defence lawyers don’t get along, their relationship is not quite easy.

They ultimately break up because said relationship was obstructing her career. Oh and Teddy revealed to Jake that Amy had a crush on him.

The first one on this list to come from the SNL family. She plays the Marshall that helps maintain Jake and Holt’s cover in witness protecting.

She is amazing. Incredibly funny. I’m kind of sad that she wasn’t in more scenes!

I love Nick Offerman. I loooooooooooove him.

He was the amazing, wonderful and hilarious Ron Swanson on “Parks And Rec” and here he plays Captain Holt’s ex boyfriend.

As much as his glorious beard.

Always playing a super weird neighbour of a victim, he is dressed in horrible sweaters and listens to songs about a dog losing his virginity.

One of the three members of the comedy music trio “The Lonely Island” with Andy Samberg, Jorma and Akiva Schaffer.

He plays the manager at “The Fun Zone”, the entertainment park where Captain Holt (or should I say Greg) works in the undercover episodes in Florida in season 3. He is the most incompetent manager ever and he is convinced Holt is a stoner.

I desperately want a “The Lonely Island” song for Brooklyn Nine Nine. PLEASE!!!

Another Parks and Rec alumna! Jenny Slate was Mona-Lisa Sapersteen and she was fantastic!! And here on Brooklyn Nine Nine, she plays a girl on the mafia that was spleeping with the guy Jake is trying to arrest.

I love her! So funny!

The Pontiac Bandit is the only criminal that Jake hasn’t been able to catch him. During the 5 season, Judy has popped up quite often.

And despite being sworn enemies, Jake and Judy has a great friendship. He gave him relationship advice, they created a surprisingly catchy theme song for themselves and Jake wore a stupid oversize white suit.

And the last two… MY FAVOURITES…

Bil Hader is a comedy genius. He is amazing. Absolutely funny. Watch him play Stefon on SNL. Legendary.

Here he is the new captain that substitutes Holt when he is sent to PR by his arch nemesis Madeline Wuntch. Right after Amy and Jake start dating. And he catches them kissing in the evidence room. And then he has a heart attack.

He is so good… I love him so much.

But my favourite recurring character and guest star has to be Adrian Pimento, played by Jason Mantzoukas. 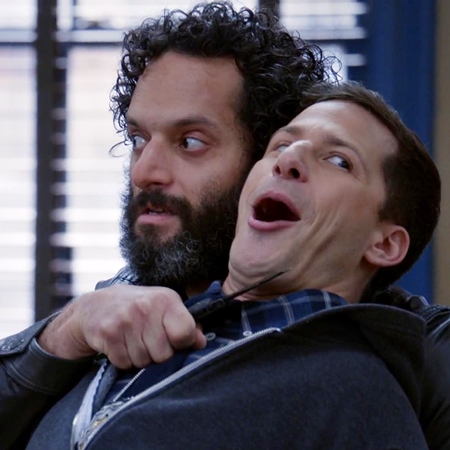 I love him! He is so funny and so disturbing at the same time! He has this weird personality and he is completely crazy. Like, really crazy.

I hoped you enjoyed this very very long post.

I have so many opinions about the show and there are so many things I love and adore about Brooklyn Nine Nine.

Please, renew it for a 6th season.

Let me know what your favourite supporting character or guest star is! And let’s start discussing the show!