I haven’t talked much about Black-ish but I’ve been watching it for around a year and I really really like it.

If you’re not familiar with it, Black-ish airs on ABC and it is about a the everyday life of an african-american family in Los Angeles.

Dre and Bow have been together for a 20 years, they have a happy marriage and at he beginning of season 4, they have just welcomed their 5th child.

Starting off with a musical episode titled “Juneteenth”, Black-ish tackles important issues and social problems with irony and laughter.

Right in episode 2, they talk about postpartum depression and the struggles new mothers go through after having a child. It’s a wonderful episode. Dre tries to help his wife come to term with the difficulties she is facing. It is something that is not often talked about and I was so glad they decided to shine a light on it. 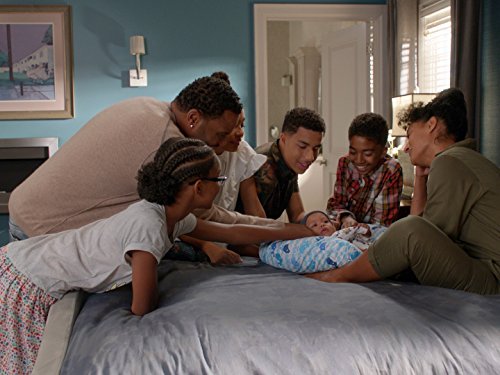 Then a hilarious monopoly centred episode, Dre’s diabetes, having “the talk” with your children and they get a dog.

I have to mention episode 14 called “R-E-S-P-E-C-T”. It’s a fantastic 20 minute deep dive on the differences between how women and men are treated regarding their sexuality and being sexually active. The reactions are literally opposite. If a boy loses his virginity, he is celebrated and he “becomes a man”, but it is a girl who becomes sexually active, it’s something shameful. In the episode they try to demystify this idiotic prejudices and send a positive message about sex.

And they render homage to Jordan Peele’s Oscar Winner movie “Get out” and its sunen place. AMAZING.

A great episode and I hope that, even if you don’t watch the show, you’ll give it a look.

Last but not least (although it is the end of the season), a tetralogy. The writers and producers decided to do something rather unusual in a comedy show: they created an arch of four episodes in which we see a particularly tough time in Bow and Dre’s marriage.

They show that even the strongest of relationships can go through horrible times. In the first episode, we see Dre and Bow fighting, we see them trying to make time for each other by going on date nights and miserably failing. And from here it all goes downhill. After that, they did an episode called “Blue Valentine”, based on Michelle Williams’ and Ryan Gosling’s terribly tragic movie and then, they try to keep the family together by, ironically, separating and living in two different houses.

Eventually, Dre and Bow reconcile but it is not an easy road. It doesn’t happen in the blink of an eye. It’s something they have to keep working on.

I absolutely loved it. It made me so sad but it was an honest portrayal of a relationship.

I can’t wait for season 5! I’m curious to see where they are going to take show next!

Black-ish will return for a 5th season on ABC in September.

Have you seen black-ish? Did you like this season? What did you think of the teatralogy?

Let me know! Tweet at me @georgiasblog1 or send me an email!

P.S. I have a huuuuge crush on Tracee Ellis Ross. HUGE.