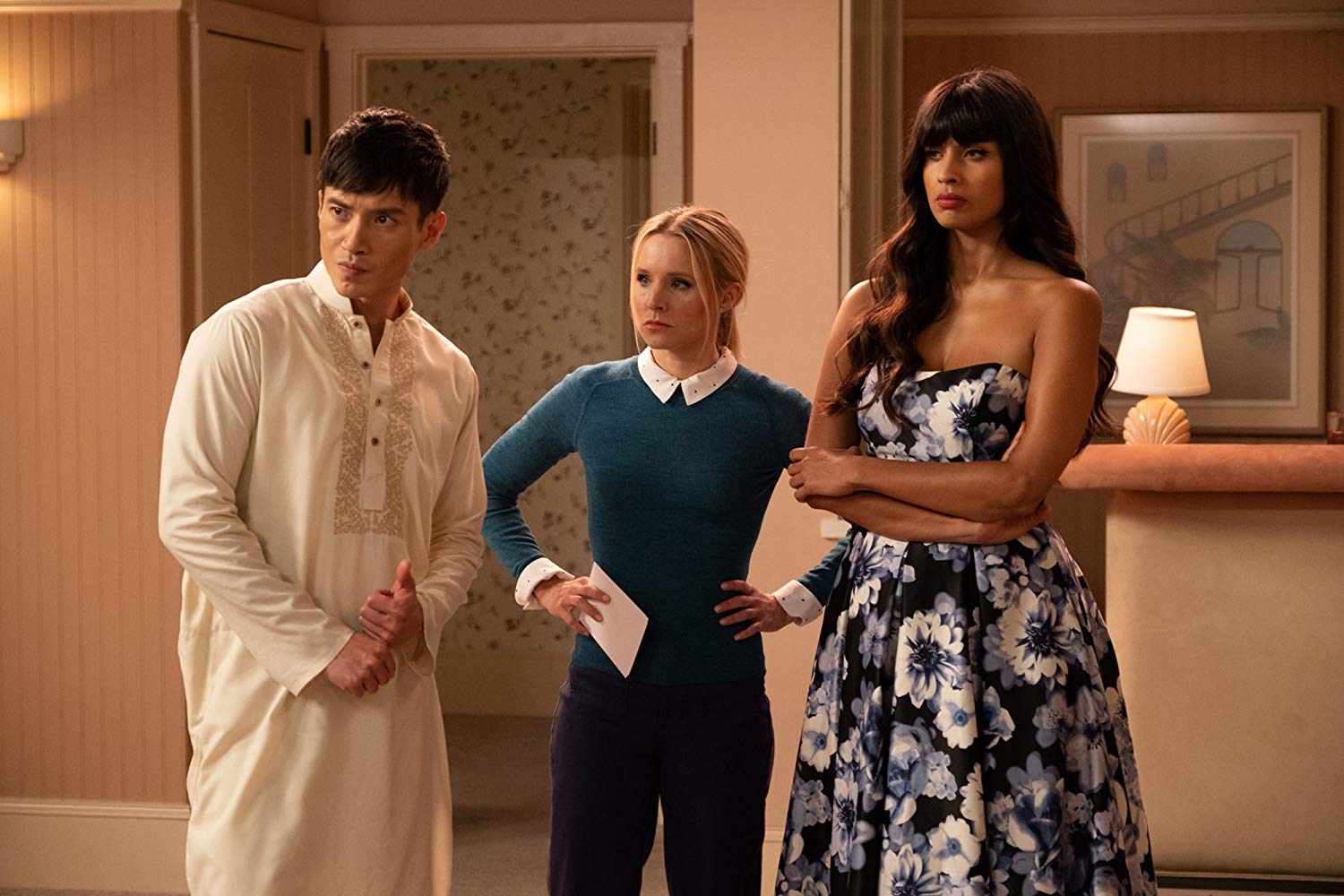 If you think “There can’t possibly be more surprises on this show!”, you are extremely wrong.

The Good Place manages to shock us week after week, leaving us all wanting for more.

The mystery figure arriving to the neighborhood turned out to be Glenn from The Bad Place!

And he left because everybody was super mean to him! Poor Glenn! The problem is that he is bringing bad news:

The Michael standing in front of them isn’t the real one! It’s Vicky in a human suit!

And now Eleanor has to figure out what to do!

It was such a nerve-wracking episode! At one point I was sure Michael was an impostor, the other I was convinced he was innocent! Ted Danson is so good of an actor I could not read him.

And that’s just not me! Eleanor starts doubting him as well.

Jason has THE MOST FUN LINES EVER on this episode and I LOVE IT!

He is even dumber than Parks and Recreation’s Andy Dwyer and I love them both so much.

DEREK IS BACK! And they’re in a room full of sex toys! Jason Mantzoukas in a white suit is amazing and I am in love with Classy Derek!

Michael’s lies start surfacing and it’s extremely hard for the humans to have faith in him and believe what he says.

His dead-pan delivery of the line had me laughing so much. Michael doesn’t want to take off his Michael suit: he is afraid the human would look at him differently because he’s a fire 6-feet-tall fire monster with teeth everywhere!

Janet has created a lie detector for Glenn and… well… he explodes. But he’ll re-form himself! In a couple of months…

Eleanor goes for a walk and finds Chidi practicing drawing horses and then have nachos together! I miss them!

I love these two!

But when Eleanor threatens to call the Judge, Michael volunteers to blow himself up…

… until Jason saves the day!

He figures out Janet is not the real one! She’s bad Janet! And Jason figured it out because she didn’t say: “Not a girl!” when he called her one.

And if you rewatch the last two episodes you can see that Janet is not really making sense!

Jason volunteers to go to The Bad Place with Michael to save Janet!

I AM IN LOVE WITH ELEANOR’S OUTFITS AND I WISH I WAS JUST AS PETITE AS KRISTEN BELL SO I COULD PULL THEM OFF!

Brent is the actual worst!

Were you expecting Janet to the Bad Janet? Do you think they’ll be able to save her? And most importantly, is that the real Michael?