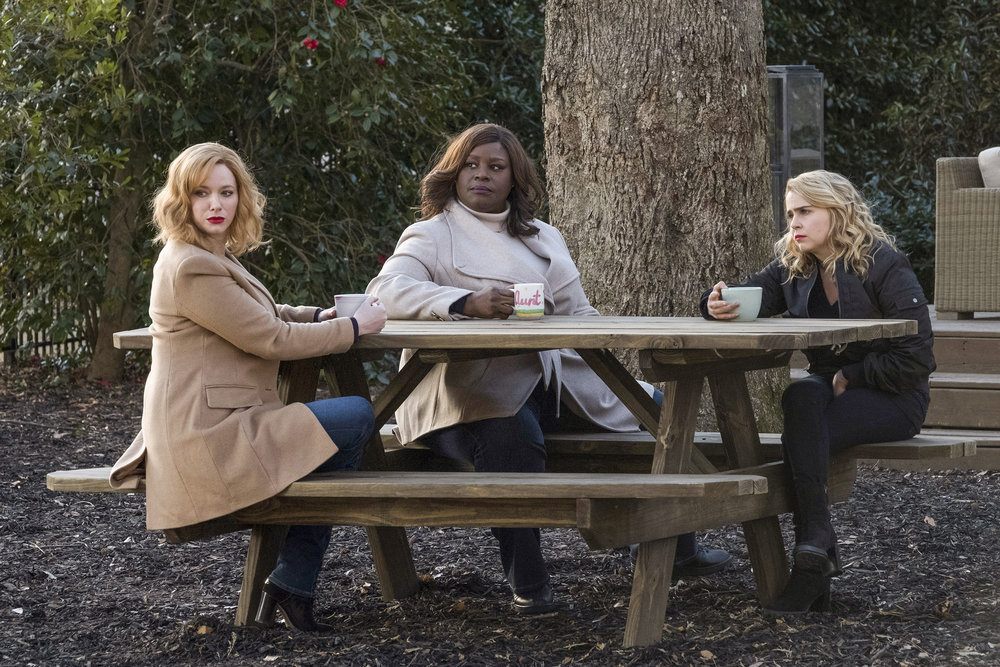 I binged watched Good Girls in one day: The pilot on July 22nd and the rest of the season on July 28th.

And I really really liked it. I don’t think I have ever mentioned this show on my blog… oh no wait! In my 2018 In TV shows post!

But I’ve decided to talk about season 2!

Starring Retta, Mae Whitman and Christina Hendricks, “Good Girls” follows a group of three women as they find themselves working for a dangerous gang, robbing stores and making money.

In season 1 lots of stuff happened: they started laundering money for Rio (Manny Montana), the kingpin by buying expensive items with stolen money and then returning them so they could get clean money.

Beth, Ruby and Annie are all in desperate need for cash: Beth’s husband basically drove himself to bankruptcy, Ruby needs medication for her sick daughter and Annie needs to provide for her daughter.

Speaking of her daughter, she is one of the few characters on television exploring her gender identity and almost nobody makes a big deal out of it.

Her father isn’t as thrilled as her mother about this, but it’s so nice to see Annie fully accepting her as she discovers herself. There is nothing but support here.

Sadie uses female pronouns to identify herself but according to thi bustle.com article, the actor who plays her uses male pronouns.

In the first installment of season 2, we see the aftermath of Beth’s plan to get Rio arrested. But it all backfires and Beth’s husband get shots in a surprising turn of events.

Ruby’s husband know about everything and he tries to convince her to turn herself in: but instead, they plant to steal the pen cap found at the supermarket that will mot definitely connect them to the robbery.

I absolutely loved the montage at the hospital and Beth’s histerical laughter. When the doctor comes in to tell her that her husband is still alive, you could see the slightest hint of disappointment on her face.

Retta’s hilarious scene at Starbucks made me laugh so hard. In the blink of an eye, I saw Donna Meagle from Parks and Rec. She is just so good.

Annie seems to rekindle her relationship with her ex husband, now married to another woman but Sadie tells her that Nancy is pregnant and all her hopes are shattered.

But the episode leaves us with a great cliffhanger: Rio ambushes them at the park and it turns out, he has a kid as well! He tells Ruby, Beth and Annie that now they have to clean up the mess they’ve made.

He leaves a bag on the bench where they were all sitting and.. we’ll have to tune in to the next episode to find out what happens!

Overall, I thought it was a great episode and the sexual tension between Rio and Beth is mesmerizing.

I’m glad this show is back and I’m looking forward to see what is going to happen next, especially noe that the police officer assigned to the case, Agent Turner, basically knows that Beth, Ruby and Annie are involved.

Have you seen the show? What do you think will happen? Am I the only one that sees the tension between Rio and Beth?