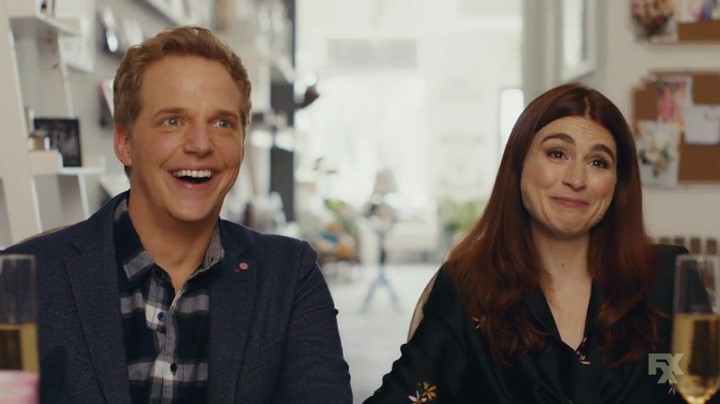 In true “You’re The Worst” fashion, this episode was a complete mess. In the best possible and most amazing way.

It was so weird, it left me so disoriented until halfway through, it was unbelievably funny and totally crazy.

At first I wasn’t even sure I was watching the right show! I had to check twice!

With their over the top personalities, careless ways and way too graphic sex scenes, “You’re The Worst” distances itself from the polished and glamorous shows on other networks, portraying the lives of two selfish, egomaniac and arrogant people who somehow found each other.

It’s a realistic, messy, complicated and overly-dramatic relationship between Jimmy and Gretchen, a pretentious writer of literature and a… PR agent for a totally stupid rap trio.

It’s not the perfect love story. There are no grand romatic gestures, love declarations or cutesy things.

And this is why I love it so much.

I was so sad when FXX announced this would be this show’s last season. Almost three years ago, it helped me so much at a time in which I was incredibly down. It made me realise what I was feeling was real and it helped me through it.

I will forever be grateful.

But I’m ready to say goodbye to Jimmy, Gretchen, Edgar and Lindsay with a bang. (Title of my sex tape!)

Right from the beginning of this season premiere, we meet Jack (Morgan Krantz), a wannabe film-maker who works at a depressing video store and is disappointed nobody appreciates his wall of obscure movies. Enter Gemma, another cinophile who becomes the first person to share his interests.

She is trying to find this incredibly rare movie called “The Intransigence of Love”.

And so they meet again during the years, in different situations and it slowly starts creeping up on you that there is something that doesn’t seem quite right.

Then they do this weird thing where they put on a virtual reality device and through “Cyber Space” they teleport themselves into a french professor’s archieves where “The Intransigence of Love” is stored and somehow they manage to retrive it.

There is a Chris Pine mention at one point that first made me realised something was DEFINITELY wrong.

WHAT IS GOING ON!?

There are more realtionship troubles for them, she has a jackass boyfriend and to whom, after sleeping with Jack, she goes back to.

I was so confused until Jimmy and Gretchen appear on the screen, 13 minutes into the overall 21 of the episode and it’s clear this whole story is made up and they are lying to somebody.

Especially when Gretchen takes over the narration. Shit gets even more stupid

They even break the forth wall and at one point it’s Chris Geere and Aya Cash playing Jack and Gemma. We learn Jack has never watched the movie, that it didn’t feel right to him. And also… he has a girlfriend.

“I need you to come back to my place and fuck me like yesterday.”

This is sooooo something Gretchen would say

At one point they are literally recreating the most classic romantic comedy of the 90s: Notting Hill. You know the scene at the end? At the press conferene? Jimmy is even wearing his High Grant pink shirt!!!

They are in France of a film festival literally called “La France Film Festival” and it’s so stupid. We see a woman throwing escements on the street like it was the 1500s and people dressed in 50s clothes with a stereotypical accordion playing in the background.

“Graphic sex and so many murders.” It’s so quintessentially Gretchen. Followed by: “There I was. Stunned to shit.”.

Somehow Gretchen even manages to bring Princess Diana back to life and THEN there is a teleportation door that brings them back to the video store. And it gets even more insane!

I LOVE HOW STUPID AND HILARIOUS THIS SHOW IS.

But this has to be one of the very few romantic exchanges between Jimmy and Gretchen and it captures the whole show perfectly.

“Why do we keep telling these wedding planners these hella tight but fake stories? Is it because we don’t have a love story?”

“What?! We have the best love story! Because ours is ugly and uncomfortable and haunting, briliant, and thrilling. and yeah, it’s messy and complicated but it’s true. And that’s beautiful. At least to me.”

Special mention goes to Jack trying to find the movie on the internet. In the 90s. And you can hear the horrible screeching sounds of the internet and it’s so iconic. Along with the WHASSAP! and “NOT!” jokes and endless mentions of movies.

Plus… VHS!!! I hadn’t seen one of those in the longest time!

I love this show and I absolutely loved this episode. It was so different and in true “You’re The Worst” fashion, so stupid, hilarious and crazy.

I will deeply miss the characters but I’m so happy to have found them.

Watch the show. You won’t regret it.