Attention! This post contains strong language because I was angry and… I can’t help myself.

It is supposed it be a show about empowering women, showing different types of women and yet, we are facing three thin, gorgeous and beautiful ladies working at a fashion magazine. And it’s not empowering. It’s the first episode and they have had a fight, they have judged each other’s decisions and yelled at each other on a subway platform. 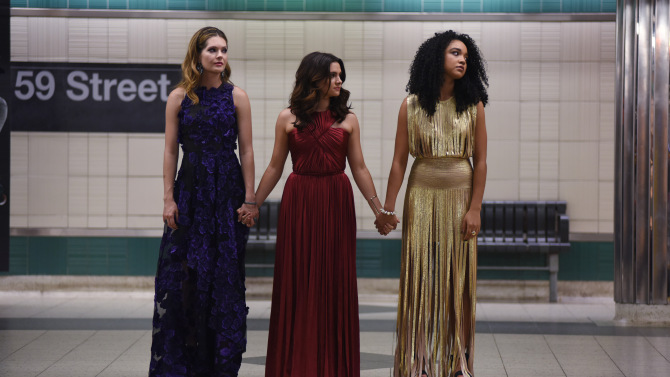 And they call this feminism? Women empowering each other?

Of course, it’s not easy writing a feminist show and be inclusive: it’s such a broad topic with opposite views within itself. But let’s try not to mix up friendship with feminism. They are two separate things the show might be confusing and overlapping.

Just because they are friends, it doesn’t mean they are feminists.

I’m obviously invested in these women’s lives because it’s what we’re supposed to do.

But the acting is appalling and I’ve come to the conclusion it is badly written.

THIS ANNOYED ME SO MUCH!

Ok they just did an episode talking about Jane never having had an orgasm and now, literally 40 minutes later, she is reassuring Ryan about how much she enjoyed the previous night.

Second, why did they resolve it so easily?! This could have been dragged for at least a couple of episode! It makes no sense!

She comes out saying she has never had an orgasm (publicly! On the fashion magazine’s website!) and with the next guy she sleeps with, she is able to climax. Not once but twice, as she highlighted.

GIVE ME A BREAK!! WHAT IS THIS BULLSHIT?!

STOP SAYING HIS NAME AND TALKING ABOUT HIM.

You are not the news. You’re job is not to cover him. You can protest his policies all you want. I’m super in favour of that, he is a fucking moron. But stop dropping his name! That’s what he wants!

I get your doing a “romantic gesture” but it’s fucking stupid.

So yeah…. I am not really impressed. It’s not bad. It’s not trash but my main issue is DON’T CALL YOURSELF A FEMINIST SHOW IF YOU ARE NOT ONE.

If you’re tag line is: “Feminism is only our second favourite F-word” and this is what you put on tv, we have got a problem.

I have just started season 2 and I’ll definitely review it as well! Keep your eyes on this space!