I wrote this earlier this week and I haven’t had time to edit it or post it!

It’s finally Monday again! Weirdly enough, it has become my favourite day! I have 5 shows coming out on Sunday night!

I was so excited about a new episode of Brooklyn Nine-nine and I wasn’t left disappointed.
To be 100% honest, it wasn’t as good as the other ones. It’s slightly less perfect than the others. It’s still perfect, but I wasn’t a fan of the storyline, especially about the identity of the arsonist.

Jake and Amy investigate crimes connected to crosswords, Holt and Gina are preparing themselves for the interview to become commissioner and Terry, Rosa, Hitchcock and Scully are trying to decide who is going to get the fanciest car.

Other than that, it was great!

The results of her exam to become a Sargent came in the mail and AMY SANTIAGO PASSED IT! SHE IS GOING TO BE A SARGEANT!
I was almost as proud of Jake was.

We can’t deny the fact that David Fumero, and therefore his character, is quite attractive and that didn’t go unnoticed by Jake!
He repeatedly says jealousy is an ugly emotion (which is true) and something I truly appreciated is that they didn’t make Vin an antagonist to Jake and Amy and their relationship. He was so afraid Amy was going to leave him!

Captain Holt is confronted by a new prospective candidate who is younger than him and has more innovative idea. And she is a woman. (Yay women!)

The Captain speaks with one of the members of the committee that will decide who will become the next commissioner. He learns that they only offered her the position to pretend to care about diversity. Given that there were 2 candidates named John Kelly and all their wives look exactly the same.

So he announces that he won’t give his presentation until a new and more fair committee is assembled.

The captain is a role model for equality. I love him. 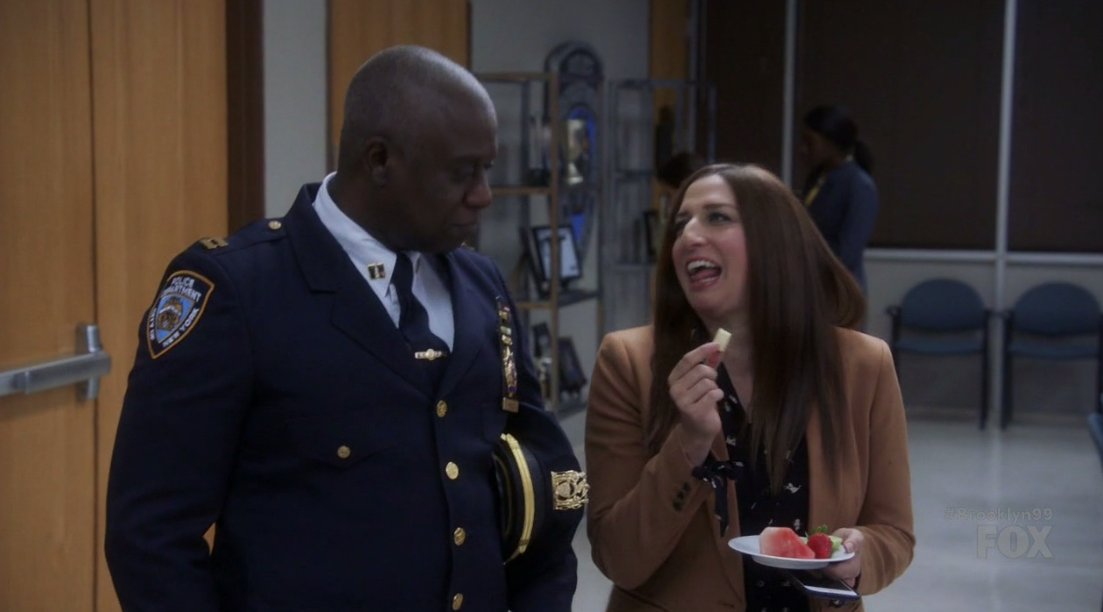 Jake might not like being jealous, but as he has stated before, Charles has zero pride and when Vin asks Jake to join him for a puzzle night, Charles jumps right in, telling him that Jake already has a friend and he doesn’t need another.

Even if, personally, it wasn’t Brooklyn nine nine’s best episode I really really enjoyed it.
I can’t wait for next week!!! 40 uninterrupted minutes of Brooklyn99!!!!!!