The show dives deep into problems in society in America and in the world. It does so in funny and ridiculous ways.

But if you look behind the stupid joke and hilarious delivery, it’s so important.

Without further ado, here are some of the issues that are faced on the show. I decided to split this into two posts and the next one will be focused on the LGBTQ+ aspect of the show. So stay tuned for that tomorrow!

One thing that really bothers me, is when TV makes women compete against each other in a petty and stupid way.

Brooklyn Nine Nine goes in the opposite direction. It reinforced friendships between women and it promotes healthy ones.

For example this amazing scene between Amy Santiago and Rosa Diaz. (season 1 episode 9). Rosa was offered a position as Captain of a small precinct and Amy was jealous. When she realised the position wasn’t that great (after her snarky comments), Amy and Rosa have a nice conversation about supporting each other. Especially in their male dominated work field. 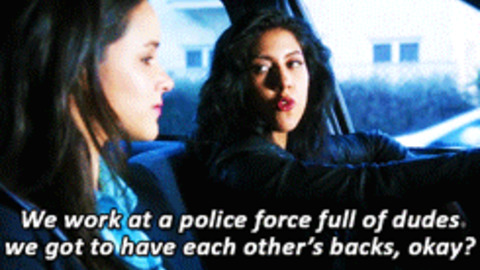 I love a supportive female friendship and women not tearing each other apart!

Another episode about women creating a supportive environment and helping each other out!

In this episode, Amy tries to get Rosa to face her fear of donating blood and Gina to confront her hatred of business men. This comes back to haunt her because Gina and Rosa then convince her to face her own fear of confined space.

It’s a great episode, it’s really funny. There is Gina in a wig and Amy threatens people.

On top of that, it’s about women pushing each other to be the best version of themselves.

I love Brooklyn Nine Nine so much.

Race has always been an important subject on the show but this episode is entirely dedicated to it.

Terry almost gets arrested by another police officer while in his own neighbourhood, searching for this twin baby girl’s stuffed animal. This then leads to conversations about race, police brutality, stop and frisk and more.

Moreover Amy and Jake, who are babysitting Terry’s daughters, try to explain what’s going on in a way that two children will understand.

This topic will come back in tomorrow’s post but for now I’d like to talk about how prison impacted Jake.

In the first two episodes of season 5, Jake is locked behind bars, has a cannibal for a roommate and is living in utter fear.

Aside from the jokes and hilarious one liners, the show explored in a typical Brooklyn Nine Nine fashion this difficult topic: basically hiding truth bombs behind clever and incredibly quick lines.

What I loved most, was the episode after Jake is freed. After having caught a criminal, he starts having doubts about whether or not he is truly guilty.

There are these great lines where he says:

“I’m not ready to be back. You should suspend me. Look, when we arrested Richmond and he said he didn’t do it, I just… I couldn’t stop thinking about it. What if he was telling the truth? What if he was innocent? And I was putting an innocent man in jail. It feels a lot harder for me to put another human being in prison after having it experienced it myself. It’s really horrible.”

Along with this, Captain Holt’s response is so powerful:

“I wish every cop had a voice in their head asking “What if he is innocent?”. You see it as a weakness but it means you’re growing. It means you’re a better detective.”

When in witness protection in Florida, Jake and Holt have to arm themselves to fight Jimmy “The Butcher” Figgis and the go to a gun store. And this exchange happens:

It’s a quick joke, in true B99 style that shows a light on such an important topic. And given what has happened in Florida in the past month, it’s more relevant than ever.

Even if it’s a comedy show, with mostly ridiculous scenes and characters, it never fails to discuss important social topics. And this is why I love it so much.

Last but not least:

There are so many scenes and pieces of dialogues in which Jake voices his feminist stances.

and of course, Jake informing Mr Santiag he is planning on proposing to Amy: