Disclaimer! This post contains strong language and spoilers for all seasons of Suits.

It has been almost  four months since the “Suits” summer finale, and I am still not okay. I am baffled and at the same time over the moon about what happened in episode 710.

I’ve been very sceptical about this season, I was expecting something entirely different from the finale of season six, where we see Harvey and Donna holding hands at the end and Mike been finally accepted into the bar association. Although Jessica left of the show last season, she continued to appear throughout this 7A, and I couldn’t be more excited. I adore the whole cast, but she is truly magnificent. A badass black woman in power. I love her.

But without much further do… let’s talk about the thing every single person in the suits fandom is talking about: the kiss.

I was expecting something along the lines of this, since the title of the episode is “Donna”. I wasn’t ready for how amazing and mind-blowing it was.

And I thought they weren’t going to leave it in the last 30 seconds of the show but this is what they did. I waited the entire episode for something to happen between Harvey and Donna and it didn’t. The countdown for the following show had already begun and I was sure they weren’t going to show anything else but when Louis made that speech about him and Sheila, taking advantage of the opportunity and actually expressing his feelings for her, I knew something was going to happen.

Producer Aaron Korsh has always been sceptical about Donna and Harvey together as a couple he said multiple times, but I don’t care. The entire storyline with Dr Agard becoming Harvey’s girlfriend after being his therapist was just bullshit. Everybody knows it. But if this is what is necessary for Harvey to comprehend the extent of his feelings for Donna, I’m not complaining.

Well, I am complaining because it has ruined half a season, one of my favourite character’s personality, the awesomeness of the show which has become a joke and the overall vibe of the show. Am I angry? FUCK YEAH.

I don’t care (but I soooo do) what he has to go through to finally be in and happy relationship, but I believe he has to end up with Donna.

Mike said it in 613 with this amazing exchange: 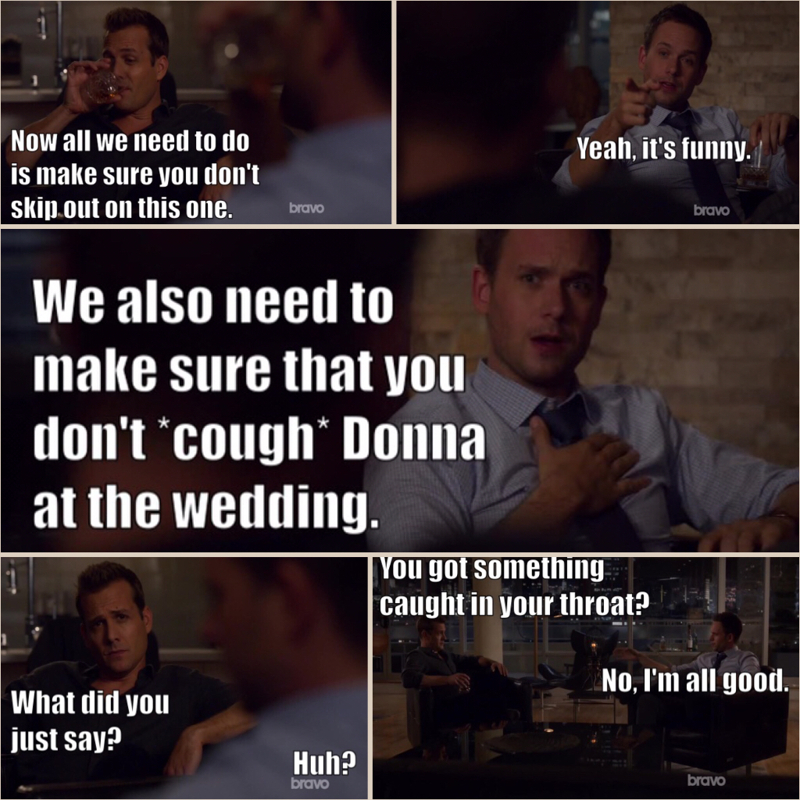 There are fantastic episodes such as “the other time”, and multiple others where you see the deep affection that Harvey has for Donna and vice versa.

Before, when she was the secretary, them being together it didn’t make a lot of sense because there was still this disparity.

Now she is COO of Pearson Specter Litt, she makes decisions about the firm and she counts as much as Harvey and Louis. They are equals. He’s not her boss any more, she’s not his secretary. They have a shot of being together in a Jane Eyre sort of thing.

I’ve heard stupid comments and theories about sexual harassment, Donna kissing Harvey without his consent and some bullshit like that. To the people wandering around telling this bullshit I say one thing. Fuck off. You don’t deserve Suits.

Now I’m just waiting for the announcement of 7B and they’re taking their sweet time!

If you haven’t been living under a rock, you probably know that Meghan Markle is engaged with Prince Harry and therefore leaving the show. The network announced her departure but they still haven’t said anything about the premiere date of 7B.

Also, still no word on whether Patrick J Adams is leaving as well and if there will be a season 8.

Please, USA Network. Don’t leave us hanging. TELL US SOMETHING.

I leave you with the gif of the kiss because it’s AMAZING.