Weirdly enough, September and October are my favourite months. New seasons come out, exciting pilots make their debut on televisions and there are the Emmys. (Just as a reminder, September 17th.)

What could be better? I am literally jumping up and down from happiness. So many shows are back, so many new stories, characters, plot twists… This is heaven.

I’m going to cheat a little bit and insert in this list a show that came back for its 2nd season on Sunday August the 27th on ITV: VICTORIA

Starring Jenna Coleman as Queen Victoria, it describes her life on the thrones. If you want to know more, there is a link on the title of each show that goes to one of my reviews. (Or rather, incredibly long rants and freakouts).

Without further ado, here is the list of my shows coming back on September:

This show is coming back for its fourth season and I LOVE IT. I literally cannot wait to see what is going on with Jimmy and Gretchen. The season 3 finale left me completely shocked and I have been wondering for months what will happen next. 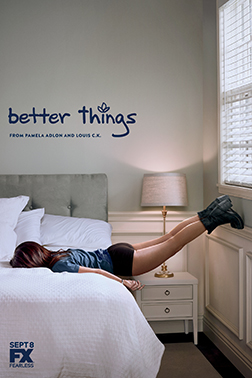 Another FX show and this is about an actress who is a single mother trying to deal with her three children and her crazy mom. I watched the first season when it came out and although it has nothing new or particular, it resonated with me. I saw myself in them. It’s created by Louis C.K. and Pamela Adlon, who also stars in it.

If you’re looking for a fun comedy, check it out!

At the beginning, I thought this didn’t have much depth. It felt like a stupid and ridiculous comedy that you watch only to give your brain a break. But it is actually so funny. And socially relevant. It talks about race, discrimination, homophobia, prejudice and police brutality… while making you laugh. It is created by Micheal Schur, who was also behind “The Office” (US) and “Parks and Recreation.”.

We left off at the end of season 4 with Jake and Rosa in a difficult situation and I really want to know what the writers have written!

Moreover, after seeing Captain Holt’s dog Cheddar, I fell in love with Welsh Corgi. THEY ARE SO CUTE! Google them!

September 26: THIS IS US

I don’t want to talk about this. I’m going to cry. And I have cried for 18 episodes plus the talk at the end with the actors. I’ve never been more devastated in my entire life.

It’s an amazing show, VERY cheesy some times (especially how Jack and Rebecca met. Probably the only thing I did not like on the show) but it makes me feel EVERYTHING. The day after I watch it, I have a horrible headache because of the crying. It rips me into a million pieces.

Highly recommend it. You won’t regret it.

Still spectacular after 8 seasons, Modern Family is back! I have seen every single episode of this show at least 10 times. Whenever I feel a bit down or I want to watch something familiar, this is what to turn to. Absolutely magnificent.

My sister and I have religiously watched 3 days a week when we were having lunch alone. I know it like the back of my hand and I’m never tired of it. It’s just so funny and deep and at times sad. It just gives me warm feelings of happiness and I couldn’t be more thrilled to have this show in my life.

Wednesdays at 9/8c on ABC

A show I truly loved and now watch only to see how ridiculous it is going to get season after season. Don’t get me wrong. I LOVE Grey’s Anatomy! But after most of the original cast’s departure, it hasn’t been the same.

I’m not really sure what they are doing with most storylines, but I’ve been watching it for years and it’s a ritual! A tradition!

I literally don’t remember what happened on previous season finale, but amen! I’ll catch up eventually!

I hadn’t watched “Will and Grace” until this year. I was 2 years old in 1998 and I highly doubt there were showing it here in Italy. Anyway, WHAT A SHOW!

I can’t believe how socially advanced it was and how much it did to the LGBT community. It was one of the first (if not THE first) show in America to have an openly gay man as lead actor. And the cameos! Ellen, Alec Baldwin, Madonna, Britney Spears, Matt Damon and more!

I love that it is recorded in front of a live audience like “Friends” because it gives it so much more life and character. I am not afraid they’ll ruin the original show (like it happened for Gilmore Girls, according to some people) and I truly can’t wait for present-day jokes and pop culture references! So happy!

Airs on Thursdays at 9/8c on NBC

I wasn’t really into it until this year and the wonderful election season. Maybe because they talked about people I didn’t know or I didn’t understand the comedy.

I still don’t get why they find a lot of the jokes funny, but it is great political satire. I feel head over heels in love with Kate McKinnon (nominated for an Emmy as Outstanding Supporting Actress in a Comedy Series) and Alec Baldwin (their most notable characters include Hillary Clinton, Kellyanne Conway and AG Jeff Session for Kate; and Donald Trump for the magnificent Baldwin).

I am sure I’ll watch it religiously every Sunday (bloody time zones, I have to wait the day after to see it).

On Saturdays on NBC

Hope you like this! Maybe there are more, but these are the ones I’m most excite about! As always, let me know if there are any shows I should watch!