I'm genuinely asking. These all 12 weeks were a rollercoaster for me. Probably my first on this blog was about The Bachelorette, but I only saw the first episode and I didn't have time to watch it. But I've been desperate (fear not, I still am) and I decided to give this thing a go. And boy, it was a good idea.

This show is absolutely absurd. I can't even find the words to describe what all of this is.

For those of you that are unfamiliar with the premises of the show, it's about a guy that wants to find love. So they lock 30 of the prettiest and skinniest girls in a huge mansion and they make them go on dates with him.

This is the best story ever. Nick has been on the show 3 times and he still hasn't managed to find love. He got his heart broken two times and now he is finally ready to settle down and find the women he is going to spend the rest of his life with. He wants to be in looooooove! This program is so trashy.

The highlight of this season was obviously the trashy Ivanka Trump impersonator, Corinne. Definitely, the most entertaining person I have ever heard speak. Just to prove my point, here is a selection of her best quotes. (Yes, she said it on national television):

What I love about the show is the fundamentally American motive they attached to it: Find love. The producers want us to believe these people are here to find love, true love, a magical love. After only 12 weeks of knowing each other.

It's so stupid and the best thing I have seen on television this year.

I have been so fascinated with the show. Before watching the first real episode (week 2, because let's be clear: Week 1 is just hugs and nice to meet yous), I thought: "How is it possible that people actually watch this shit?"

It's trashy, full of clichés and completely fake.

But it's addictive. It's so full of bullshit about finding love and a husband.

There are these rituals, the rose ceremony, the homecoming dates, meeting the parents, the one-on-one dates, the two-on-one dates…

But it's great television. Here in Italy there is a similar program but it's not based on LOVE and the people are shallow, but this brings reality tv to a whole new level. 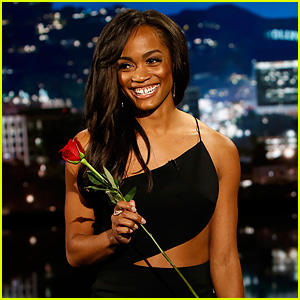 And also, it took them 21 seasons to choose the first black Bachelorette? Come on, America. Speaking of Rachel, the announcement of her as the next bachelorette was done before she was kicked out of the show. WHY, ABC? WHY? YOU RUINED THE SHOW FOR US.

You can announce that one of the girls is going to be the next bachelorette before she is sent home!!! What went wrong?!?

Also, this fake empowerment of women makes me sick. To me, it feels like it's wrong to portray women in pretty sparkly dresses whose only concern is to get married, have babies and feel complete. DO DON'T NEED ANYBODY TO FEEL COMPLETE, GIRL! COME ON! They were drunk half the time, in every single scene of the first episodes, all the girls constantly had drinks in their hands. And I really mean it. ALL THE FUCKING TIME.

Aside from this, it's great. It's so great. I have watched some trashy tv shows in my time but nothing compares to this. I think it was impossible for people to go on television and say such stupid things. But this show celebrates this.

I highly recommend you watch this season, because it has been hilarious. Corinne has been AMAZING. I want her to be my trashy friend. I need her in my life.

I'll definitely be watching "The Bachelorette", although I know it will be impossible for the producers to top this season.

Ah, before I forget. I would like to congratulate the person who found and produced Corinne and to declare to her/him that they are my hero and someone who deserves an award for the amazing job they did.

With this, I bid you farewell, The Bachelor. See you in May with The Bachelorette! Go Rachel!

4 thoughts on “The Bachelor Season 21”